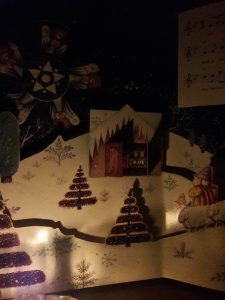 Beyond all families and food events (which are also important) you can also remember that Christmas and other religious event don’t belong to one specific religion but are here to help us to harmonize with the cosmos and its rhythm… 21 December, the darkest day of the year, 24, the Sun rises again. So we dive immediately into the relationships between Earth and Sun.

The four seasons of the Earth can be seen as a rhythm of the Earth, a specific breathing process. In spring and summer the energies have a ‘’yang’’ movement. Towards outside, autumn and winter have a yin aspect, energies toward inside. Nothing very new nor surprising till now. But in the most simple and obvious things are the greatest mysteries. So there in a kind of rhythmic breathing of the earth, as there is breathing in human being.

Through rhythm we can find correspondences between the microcosm and the macrocosm, meaning the human being and the planets and stars system.
In summer everything opens and connects but if you look carefully you will notice that your level of consciousness gets less. That’s effect of warmth on consciousness: It makes it asleep. In winter everything goes back to itself. The inner world becomes more important. The forms get sharper and the thinking as well. In summer there is less consciousness but more connection and actions, more wil. In winter, less action, more reflection. Silly and evident till now.

Seen from the point of view of consciousness, the earth sleeps in summer and gets awake in winter like a human being sleep at night and gets awake and self-aware the day. Thus this is the opposite movement of the energy: energy is yang, towards outside in summer, yin in winter. That’s why it is so important to know which aspect and which level you are looking at.
Breathing between inside outside, sleepy consciousness and awakened consciousness. As a being you can say that the earth becomes more self-conscious in winter, like we do when we awake from sleep and activate our thinking. Self-awareness happens in the thinking.   In summer you dive into perceptions around you, in winter more into reflection,into thinking.

What was symbolized in religions and rituals has to be found again through clear free thinking. Religiosity doesn’t need any more any churches or authorities. They have made their job. Knowledge, observation and thinking are the means we can get access in a free way to deep understanding of the microcosm-macrocosm’s events.

Christmas can only be understood by starting  the movement in autumn, the Michael time. At that moment the earth takes back the energies which had been released into the cosmic space during summer. This was the yang outside movement. But those energies and beings connected to them has been enriched, re-informed through the star’s system. In summer the energies are reaching up into the cosmos, collect there the comic’s influences where the spiritually hierarchies are active and bring it back to the earth in autumn. The earth is so to say fertilized through the cosmos. These cosmic impulses follow them their path direction inside, in the depth of the earth’s body. That’s perhaps one the reason why we can feel those nostalgic feelings in autumn: We intuitively perceive the cosmic forces, the resonance of our cosmic origins.

But then those news seeds of knowledge have to sink in our consciousness, deeper and deeper till it becomes a new impulse of action, a new impulse in the will: a new child. A renewing of our deepest desires and will power. Which means a renewal of our physical body. The physical body being the most connected to the will body. It is thus the seed of the glorious body which is send to us. The birth a Jesus can thus be this image of the seed of the need glorious body, which have been generated by the Sun’s forces.
A new Sun being is born in the will.
That’s could be one aspect to reflect on for this Christmas. No need to specify that it is just a personnal understanding amongs others….