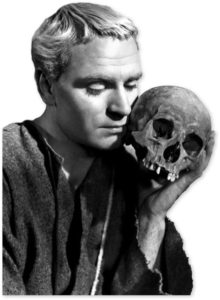 Can we imagine Hamlet holding a femur for his ” to be or not to be ”?

No, it does not work!
The femur is 2001, Space Odyssey Stanley Kubrick, Tata, tata, toutouotutoutoutoum ….
The femur is the tool, the weapon to smash the skull of the adversaries, the hand that takes, acts in the world, the violent, transforms, creates new.

The femur is the line, the radiation to the outside. Launched in the air, towards space and the future it becomes technology. Stanley Kubrick’s breathtaking shortcuts.

To say: The line principle, the femur, the human limbs is the will in action.
The skull, the round, the enclosed in itself, is the consciousness, the self-reflection, the place of the ” to be or not to be ”. The reflexive place, self-awareness.
Crane and femur, sphere centered on itself and lines that express themselves in space and time; Thought and will, fundamental polarity of the human being

(Little thought while preparing my course on organs …)