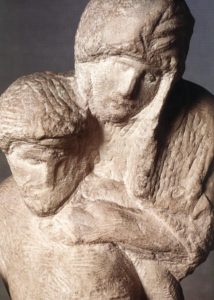 Here is a text I wrote a week ago following the sacrifice of the police during the hostage-taking in France last week:

Today listening to the radio: The death of this police officer who sacrificed himself. He gave his life to save the lives of others.

This act is the absolute act. Absolutely everyone feels this act deep inside. With gravity and respect. An immense, deep, unfathomable respect, for everyone feels confusedly that this sacrifice speaks of man. This sacrifice touches the most intimate fiber of each. Everyone feels the grandeur and heroism of the act, as in any tragedy of self-giving to save others.

This act unites us.
This act binds us to each other because intuitively we recognize ourselves in him. Not to brag and pretend that we would have done the same, but on the contrary. We know, we have the absolute certainty that we are witnessing the act of courage that reveals humanity itself.

It is striking that this act is happening the week of Easter. For it is here to remind us that the sacrificial act of Christ is not an apology for suffering or a pathological act but touches the root of the Being. A country that pays homage to its hero sounds with the original sacrifice.
(I hope it is clear that I am not trying to recover an event, but to express the community of inner experience between two freely chosen acts: Sacrificing oneself to save others.)

In Christian esotericism the creative act of the universe is a sacrifice. Thrones sacrifice their Being and the first substance is created. It is our very origin that resonates through this sacrifice. It is the deep self, the emergence to existence that resonates. This is my origin and my future.

The sacrificed becomes a hero, an example, a possible future. The act of sacrifice overcame death. This is what resonates so strongly, which gives this gravity and universal respect.

This universal resonance is the hope of humanity.
If such an act resonates in everyone with so much strength, it is because it represents humanity.
And if every man, or even a sufficient number of men and women, reached their humanity, then yes, I believe that the world would be saved from the announced disaster.

In this future where we risk losing the planet, such an act brings hope and faith back to man.

2 thoughts on “The sacrifice.”