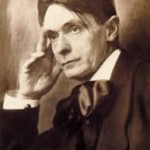 There are three soul forces in human beings: thinking, feeling and willing. These three forces are bound up with the physical organization. Certain thoughts and feelings will call up certain acts of will. The human organism must function correctly if the three soul forces are to act in harmony. If the connection between them has broken down due to illness, then there is no longer consistency between thinking, feeling and willing. If an organ connected with the will is impaired, the human being will be unable to translate his thoughts into impulses of will; he is weak as far as action is concerned. Although a person is well able to think, he cannot decide on action. Another disturbance may be that someone is unable to link thoughts and feelings correctly; this human cannot bring his feelings into harmony with the thoughts behind them. Basically that is the cause of insanity.

In the normally constituted human being of today, thinking, feeling and willing are in harmony. This is right at certain stages of evolution. However, it must be born in mind that as far as a person is concerned, this harmony is established unconsciously. If a person is to be initiated, if he or she is to become capable of higher perception, then thinking, feeling and willing must be severed from one another. The organs connected with feeling and will must undergo division. Consequently, even if it cannot be proved anatomically, the organism of an initiate is different from that of a non-initiate. Because the contact between thinking, feeling and willing is severed, the initiate can see someone suffering without his feelings being roused; he can stand aside and coldly observe. The reason is that nothing must occur in the initiate unconsciously. An individual is compassionate out of his own free will, not because of some external compulsion. He becomes separated into human beings of feeling, a person of will and a thinking person; above these three is the ruler, the newfound individual, bringing them into harmony from a higher consciousness. Here too a death process, a destructive process must intervene; should this occur without a higher consciousness being attained, insanity would set in. Insanity is in fact a condition in which the three soul members have separated without being ruled by a higher consciousness.